I've heard that listening to advice of your own, given to a younger yourself, is a bit of wisdom that would be useful.  Of course that's assuming that your older self even exists...but of course we all think we'll live another year or two. 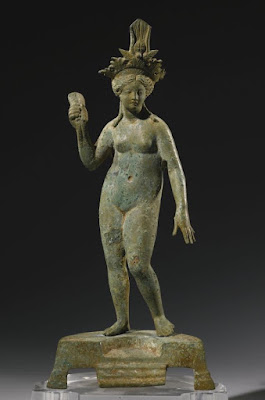 So now I have about another month of being 75.  If I told myself 10 years ago anything, what would it be?

"Get out and do, whatever you're passionate about, just do it." 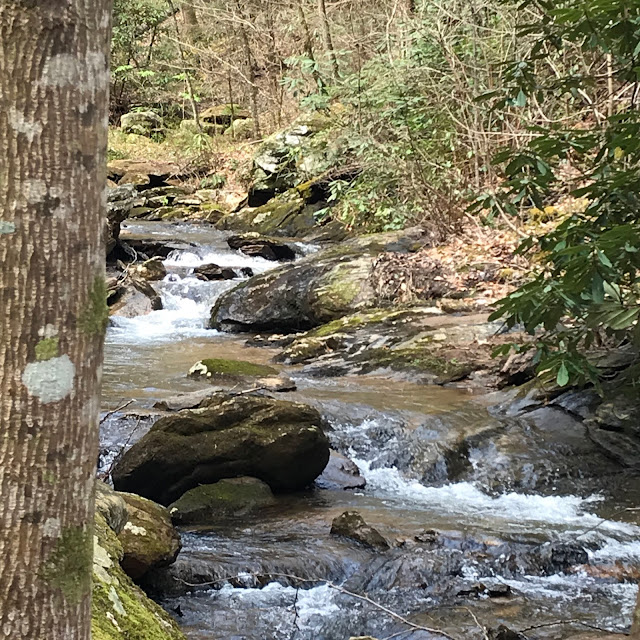 My advice comes from how the body just breaks down like stones on the bottom of the stream bed...the parts are wearing away gradually, and not noticeably until time gives you a jolt that that part is no longer doing what it has been all along. 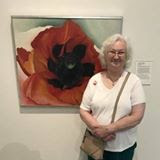 In the last couple of weeks...
This is the list of things in my life, but it's not said in a complaining voice.

I've deal with loss of a loved one (I know, a cat may not be that much to anyone else, but the intimacy of living together for years does make a huge difference!)  I'm still dealing with the death of two loved humans a few months ago.

I've had major testing to find out whether my insides are working, and the tests show nothing, but the symptoms still cause chronic pain.  I have 2 other chronic conditions which require treatments twice a day.

And I've stubbed a toe resulting in a minor sprain of my ankle.  And I've found bugs biting my body while sleeping under covers, which may or may not be bed bugs, but I've treated my whole house, my bed, my clothes and linens as if it is (which took a day of my life, but really needed that deep cleaning.)

And the rent is being raised because I can't deduct as many medical expenses for the last year as I did the year before.  Basically, I never can save anything.

"Listen to this, 65 year-old Barbara.  Take heed.  You thought you were living frugally back 10 years ago, (2007) when you retired to Black Mountain NC from Florida.  You gave away and threw away so much.  Ha ha.  Just think that in 10 years you will need almost none of those things you held onto."

Now if my 85 year-old self has anything to say, I'm listening!

With the way my life has been going, I think she will say, "Pay attention to your health while you have any (so to speak).  Eat right, exercise as you can, and be friends with people who are walking similar paths to yours.  Work on what's most important to you right at that moment. And be as creative as your heart desires! Don't edit so much...let go! And especially get off the computers and out into nature!" 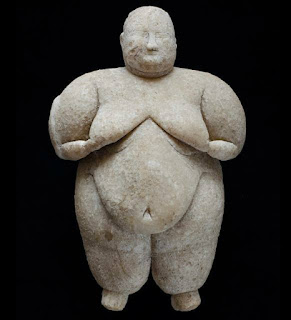 I had lunch with some of those friends after church last week, and posed this question about advising my younger self from either now or in the future.

A couple of those friends are already older than I am, so I was interested in their thoughts.  Several of them mentioned that its important to take care of yourself first, and then to offer care for others.  "Make someone else happy by anything you can do."

I liked that.  I forgot how much I do have to give others.  Just listening, paying attention to them, and letting them know of things I happen to know. 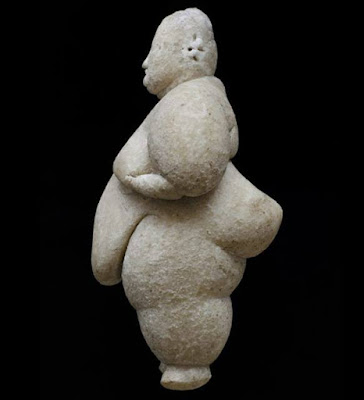 Earlier in the day a woman shared that she'd just lost her mother and was very upset.  I mentioned that I knew of a Grief Group here in Black Mountain, which meets monthly, and that I'd gotten a lot out of the time that I attended it, sitting around a fire pit and sharing with a small group.  She looked it up on line, and now has another resource that she might use.

What does your older wiser self have to tell you? 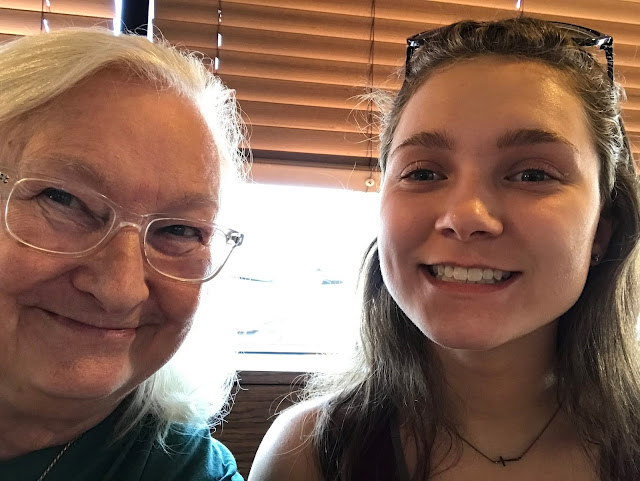 Here are all the photos I got from a supper meeting with family.  I drove over a hundred miles to see and hug my 5 family members who stopped on their way to a vacation!  Here my newly drivers-licensed granddaughter smiled with me and told me that she can now drive on highways. (She's got my dimple I notice) 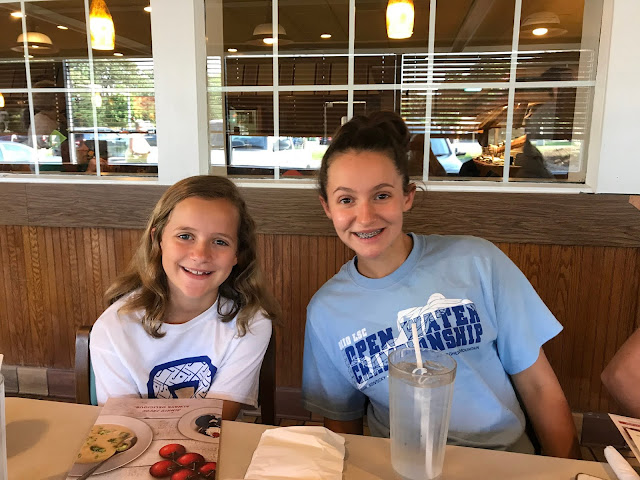 Two of my wonderful grands posing with their beautiful smiles. 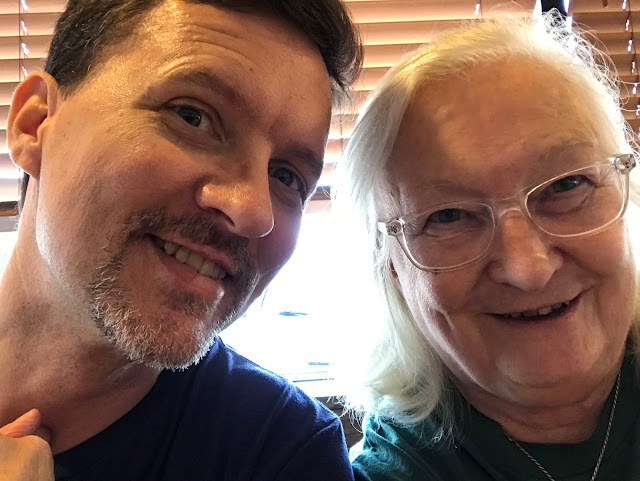 My "middle" son and myself in a selfie...there's my dimple next to a horrible shot of my teeth! 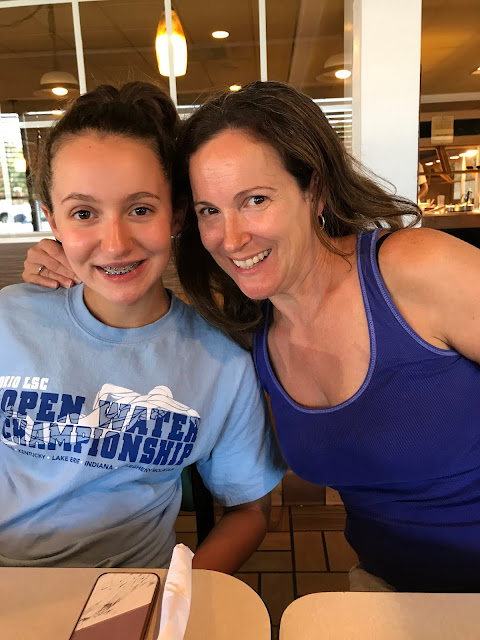 Very tan and trim daughter-in-law and her daughter in posed photo. 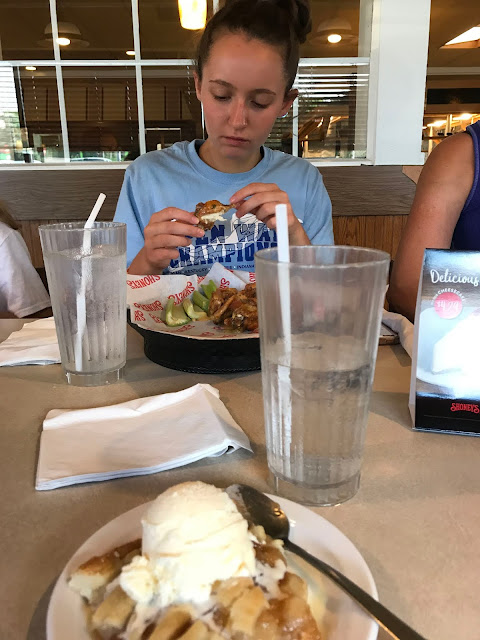 Now we got seriously into eating...my pie a la mode in the foreground! 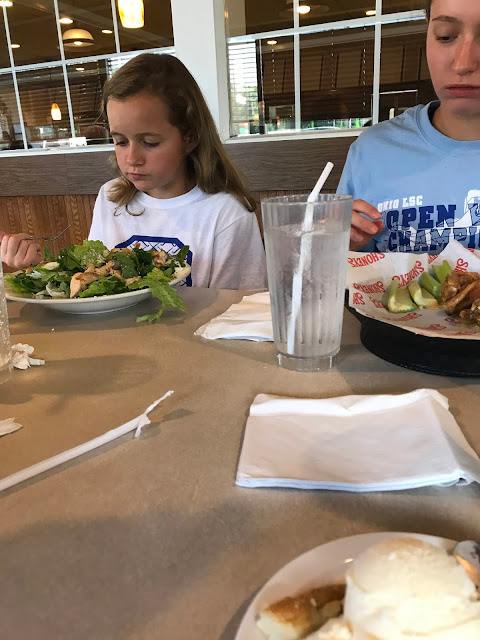 Everyone else had salads! (But I'd just had lunch 2 hours before meeting them at a restaurant in Knoxville TN. They were delayed by traffic on I-75 in Kentucky.) 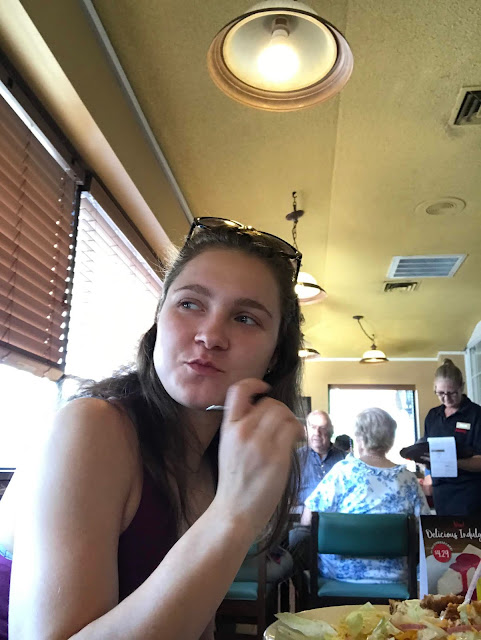 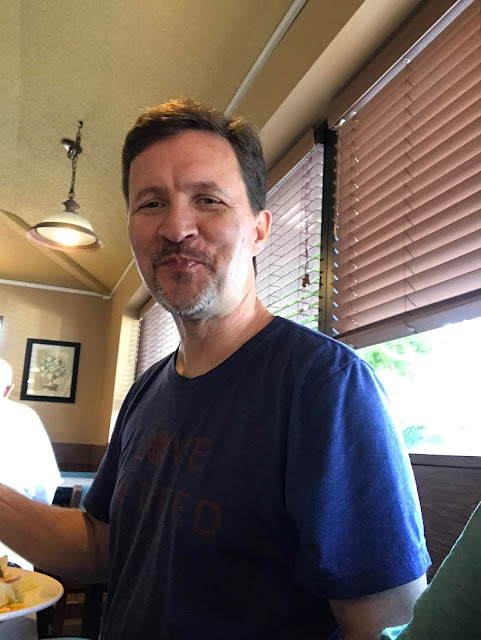 Notice how they keep their mouths closed but still smiled with their eyes? 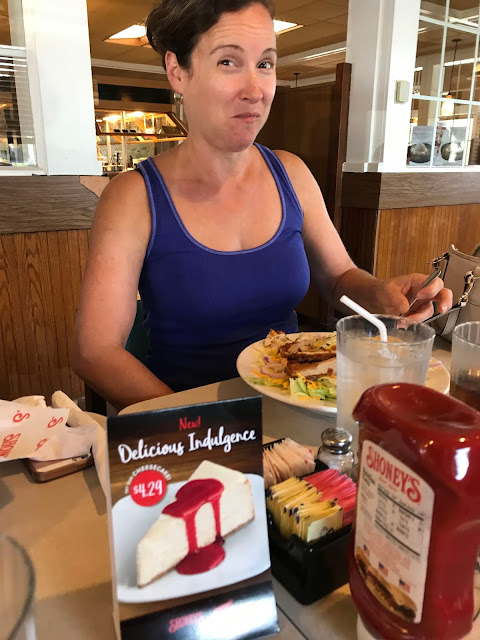 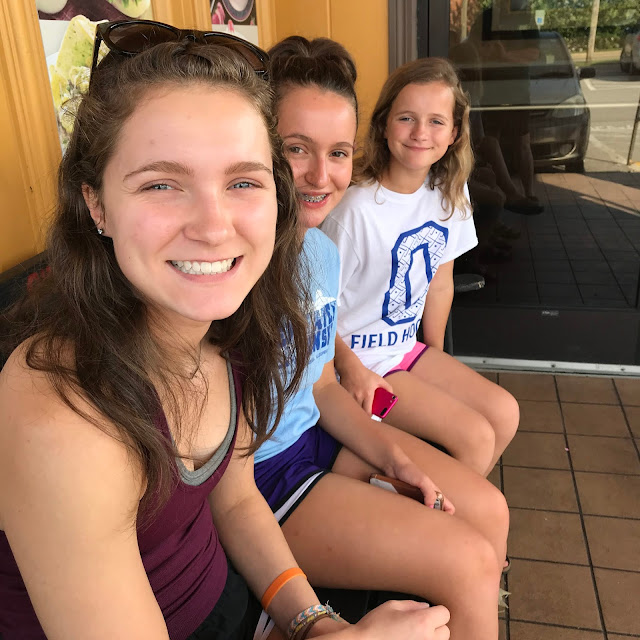 My beautiful granddaughters...posing with my car and reflection in the doorway! 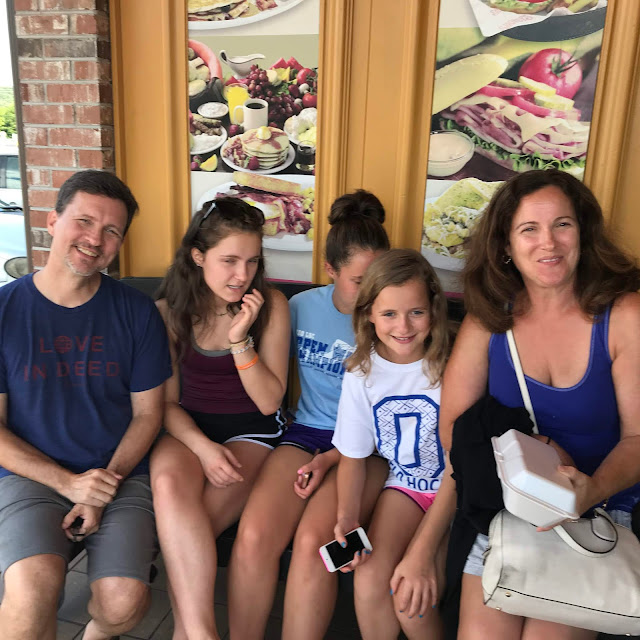 Getting ready for the pose... 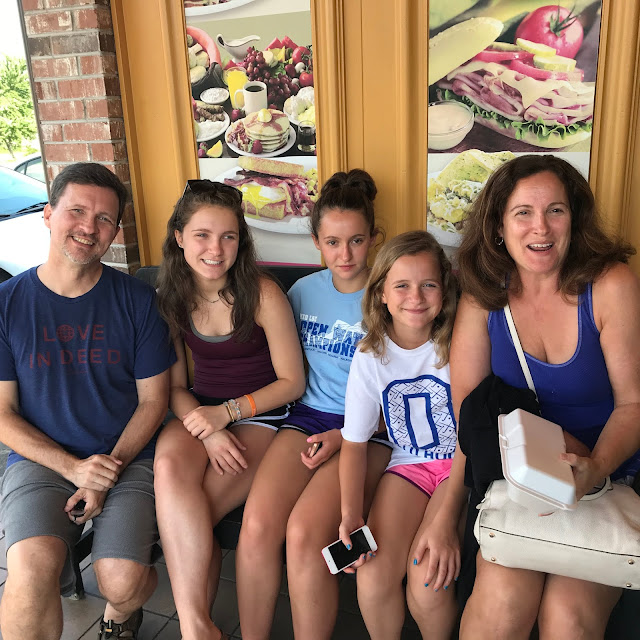 The posed photo!  Hope you all have a wonderful time at the beach!

July 23, 2018
Yesterday was the one-month anniversary of the death of my cat.
What, you must wonder, you're upset still? Actually I was doing fine, over the last several weeks I've been too busy to notice the lack of a being which I had an intimate sharing of my life with, much as a spouse in that we had no secrets from each other...but of course I was totally responsible for her care as her health declined.

We never realize as it happens, while we do more and more as it's needed, how much of our mental and emotional energy and just plain time is sucked into a sick being's need for care.  Each day is just a bit more, with sometimes a respite, so we can return renewed to love and give and think about what might help.

And the vet is very helpful too, but adds the burden of a financial strain.  Their view is to present options, and they do this lovingly, but I had to make choices between all these options. I had to give the medicine, using all their recommendations, and a few I thought up on my own.

And I had to live through the days when that sweet little creature just slept curled up in one or another favorite place.

So yesterday I read the journal entries of the experience of euthanizing my cat, Panther.  And I cried again.  It was surprising to me.  I mainly cried when thinking of all her sweet tricks that she had performed when a younger and healthy cat.  Oh the laughs she gave me.  Not like a dog doing tricks, but just cat tricks which were subtle and yet clearly her being was interacting with her environment.

I am firm in my resolve to not have another cat.  This is rational, with my continued health needs and the allergies triggered by just about every kind of litter, more than the fur which lands everywhere.  And I admit it is to protect myself from experiencing this loss again, as well as to keep from leaving a pet without care if I should die first.  I have found my limitations as a care-giver, at least at this point in my life.

This doesn't mean I can't share love.  I certainly hope not!

The other anniversary fast approaching is my birthday, the 23rd of next month.  So I will no longer be 75.  Shall I again change the name of this blog, which used to say "When I was 69"?

I don't actually know yet.  For now I'm looking at what each day demands, and perhaps to find what it can give as well.  And I'm so very grateful that I woke up again this morning!

That meant shifting the postings about the ancestors that I've added to this blog in the last month.  I've got a whole lot more over here, from last year going back 6 years or so.  I don't think I'll shift them all!  The family history blog can be the place I store information (and pictures and documents) that I want available without going to the Ancestry site (which is a leased site).

Today I'm getting into shifting my activities as well.

I'm volunteering in different venues for the rest of the summer.  Instead of spending time (and money) daily to make pottery, I'm going to work as a docent in the Swannanoa Valley History Museum.  I think I need to focus on my interest in history and genealogy for this wonderful little town of Black Mountain, and the area around it in western North Carolina.  The Western North Carolina area is so distinct that most people use Capital letters to designate it, or just say WNC. 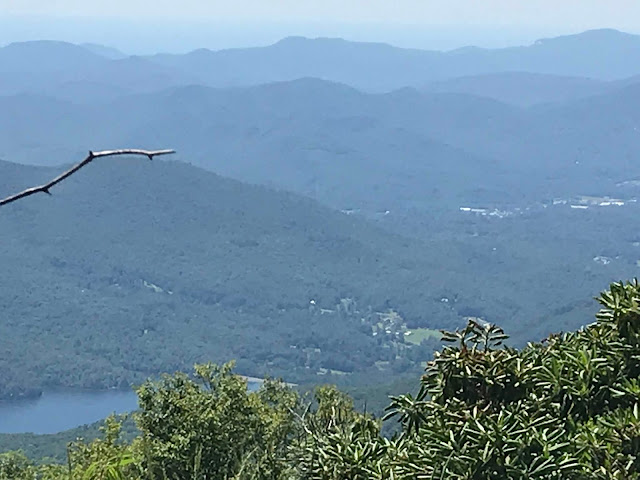 It's mainly mountains, and wonderful valleys, and a few towns with Asheville as one that gets to city status.  It has enveloped several of the smaller towns around it, but Black Mountain stays distinct.

This morning I sip my coffee as I listen to Marina Raye's flute music, and birds out the open windows...and a bit of traffic away in the background.  Occasionally a train rumbles past and toots its noisy whistle at the crossing of Blue Ridge Road.  Yes, who knew that I'd retire and actually live on a road by that name...which elicits the nearby parkway which is a national park.

So that is where my thoughts are this morning.  MAYBE I'll also go sign up to volunteer at the Old Depot in Black Mountain, where I already have my pottery for sale.  It just makes sense!

July 30, 2018
For the last few days I've been thinking about my white female privilege.
That's because I have worked for civil rights for minority races.  I've marched several times for women's rights (which spill over into all areas of life.)
But I recently decided I've still got a bit of prejudice.

I like people who are of my own class.  And then I turn around and complain that poor people are treated in different ways, not included as citizens with the same thoughts, opinions, abilities as those who have economic privilege.

So I'm part of the problem.  My friends mostly have gone to college.  I tend to enjoy conversations with intellectual underpinnings. I only seem to associate with those who have some leisure time because their needs are met somehow.   I am relatively a snob.

Yes, that's the whole thing about a prejudice.  My kind is better than their kind.

My kind is more tolerant than your kind - my favorite intolerance!

Just think of the political divide, which has never been wider/deeper than it is now.  (Actually I think it has been just as bad in the past, but our communication outlets are faster and more prevalent than ever before.)

I need to work on myself, not the challenge that is out there, of identifying where class (economic and educational) differences are rampant in my own life.  When I can see all people as equal, then I can stop being hypocritical in addressing the very barriers that I unconsciously support.