Good day to you!
I am adjusting some things in my life.

First this blog has been sitting idle for 3 years.  So I'm going to revamp it a bit.

I'll be adding personal notes (I know, you don't have to groan, just skip them.)

And I'll try to give new visitors some information that I've gleaned in my 11 years living here.  So I'm certainly no expert.

First I need to bring some older notes over to share, which are part of my life that I blogged about in the last month or so.  So if they talk about something that happened in July or August 2018, that's why. 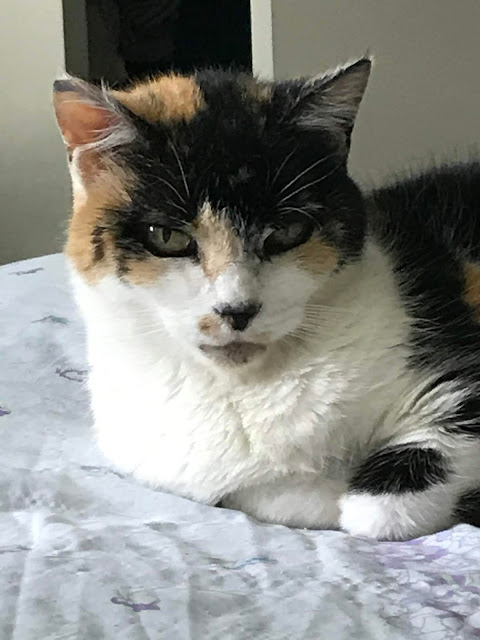 Sorry friends, this is a sharing that is beyond my usual journalling, because I do want to touch base with someone that might have a similar experience of loss. 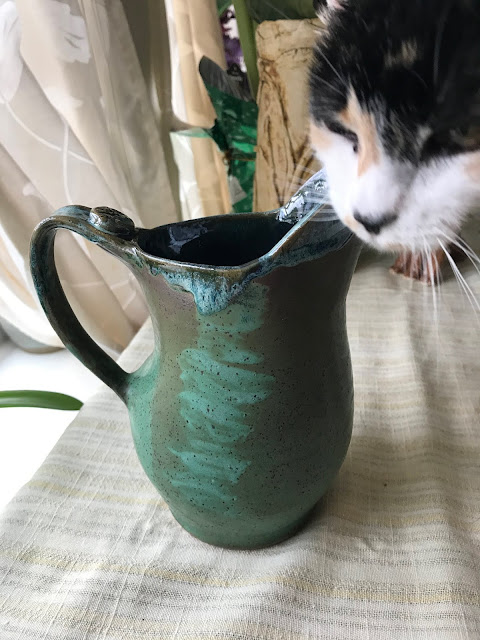 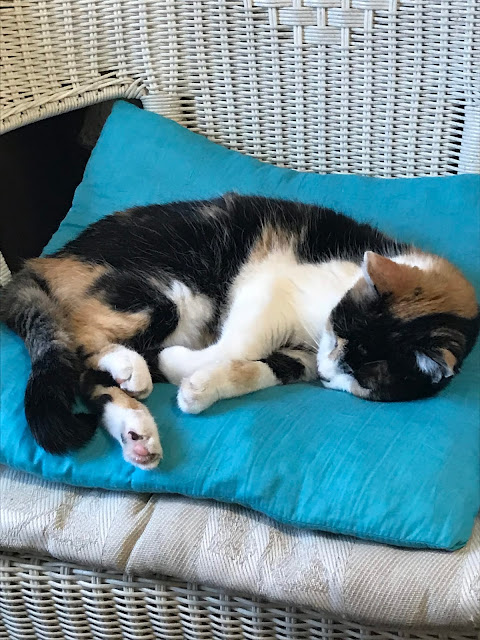 There's the standard stuff, suddenly being shocked as I walk into the next room, and it doesn't have her in her regular places.  I have gotten so I tell myself before I go into another location at home, "she won't be there." 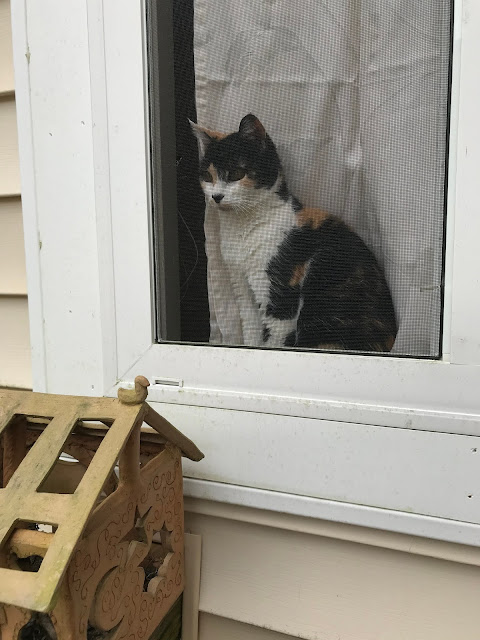 There's the jolt of energy when I see something in the kitchen which was associated with her, all those bowls and plates to try to get her to eat something, anything.  I took out trash yesterday with the last of the little tidbits I'd been enticing her with. 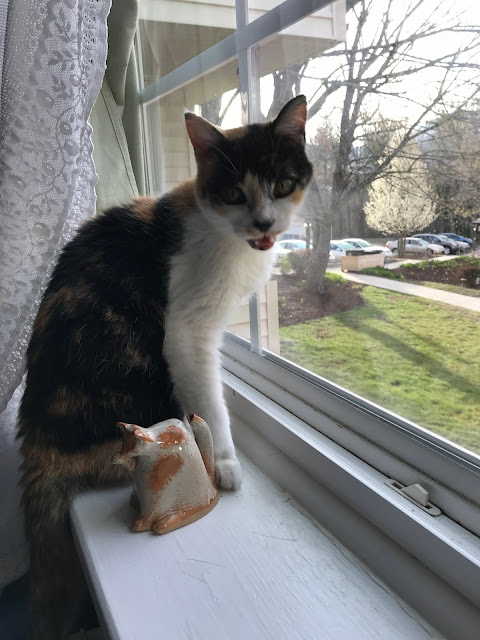 Yes I have to gird my loins (whatever the heck that means) but mainly clinch my jaw and be strong enough to write a letter requesting the management to return my pet deposit, and include a copy of the invoice I paid the vet for her euthanasia. 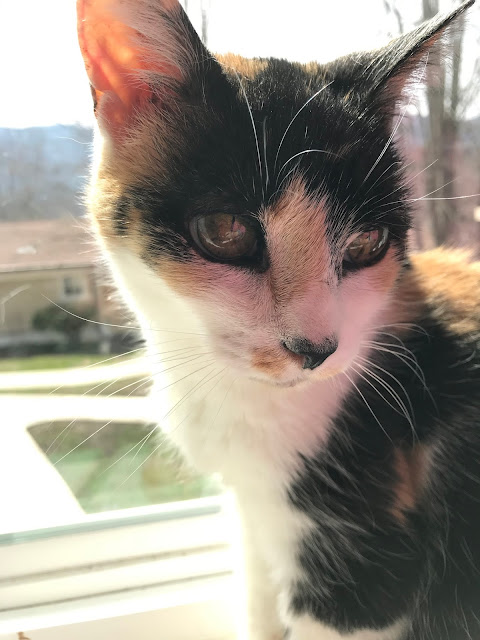 I no longer have anyone to talk with.  I know, you would think I could just continue saying strange little things, like calling something (rather than her) a cute little poo-poo and asking her if she is ready to take her medicine, which I've hidden in yet another kind of nibble...instead of just being the strange old lady I often think I am.  But that isn't happening. I am quiet.

Nobody is mewing at me when I wake up. Nobody is cuddling next to me when I lie down in bed in the very particular way a formerly-feral cat would do...never a lap cat, but she would walk up and down beside me, using my hand to sort of pet herself, then settle in just that way that felt right. 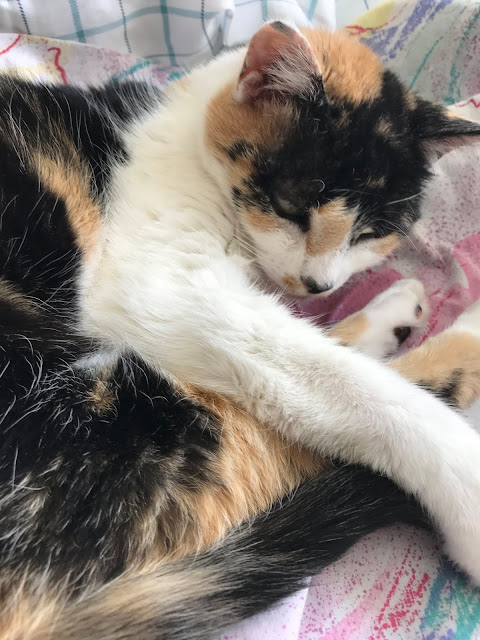 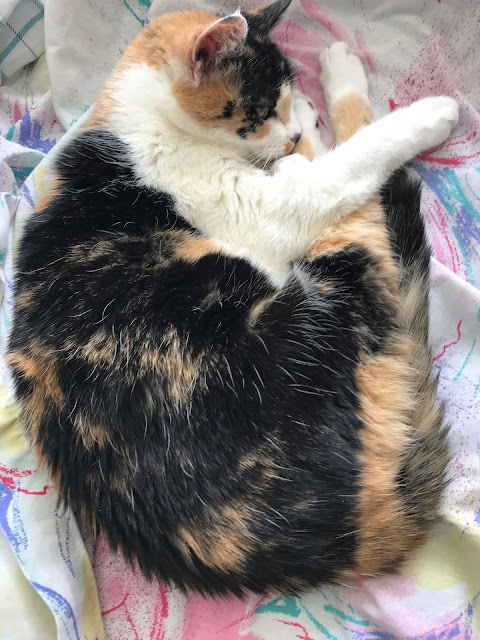 I sing mental songs - little tidbits like "we're only here for a short while."  I pray, I meditate, I do all the things I'm remembering to do to honor the life that was shared with me.  I cry. 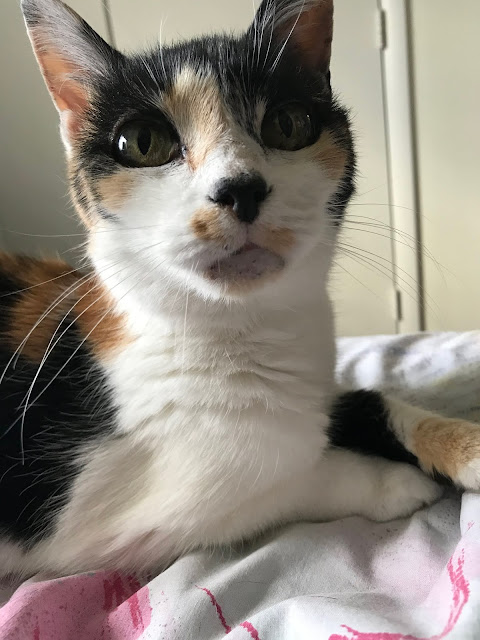 I remember she's the third death (in that series that old wives tales give us) and there were those really important humans that I've also lost in as many months.  But I wasn't living with them.  I do miss my daily talks via emails with Rosie, especially at the times I would most want to share and hear (read emails) how she was doing. 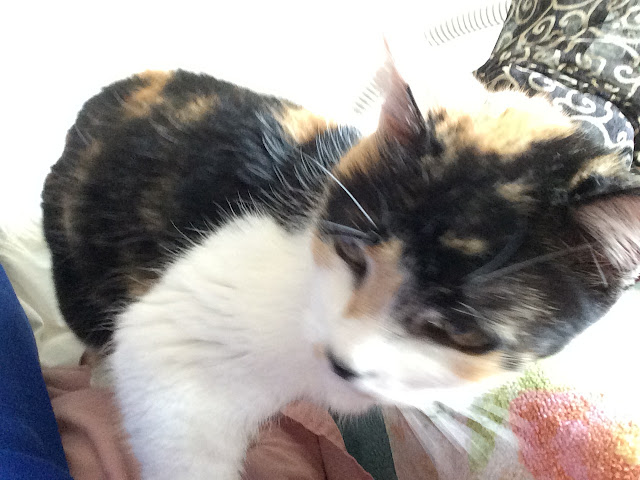 My dear friend had what would have been her 76th birthday last week, and I wrote her husband to share it...and he said their anniversary was also that week.  I'm sure he's living in a home which is soaked in her life still. 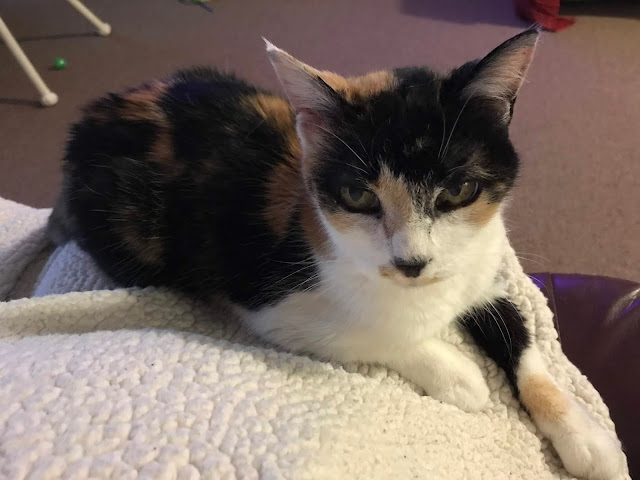 My cat, my friend and my sister are all honored on a little altar that has new photos of the cat centered on it.  When her ashes come home, they will join my other deceased cat that I lost 2 years ago.  I miss them both. 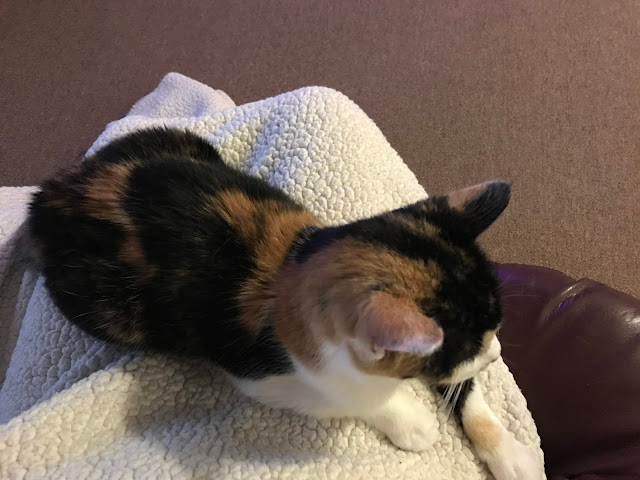 I'm working some clay therapy at the studio, sculpting some cats.  Not so much to look like Panther, but to give me some time to concentrate on catness. 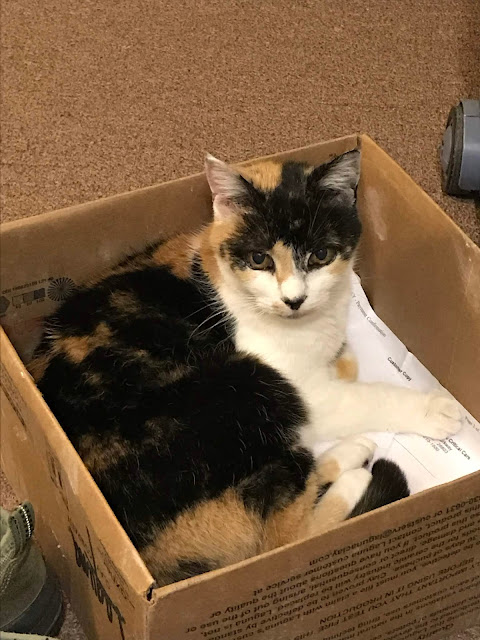 Panther's spirit, wherever you may be, you made a big impact on my life for the 6 years we shared.  I hope I didn't let you down.  I fear I did. I will try to fill the gaps that you've left with joy and sharing with others the beauty that you shared with me.

She used to love sitting in front of the TV when Nature was showing. (See this old post about it.) 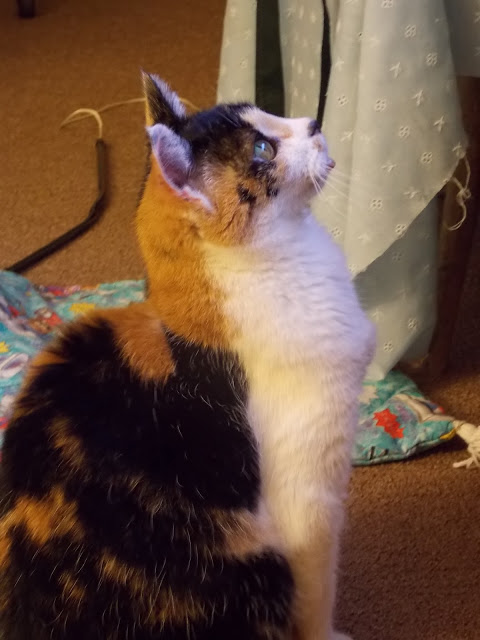 She had been feral and a friend had gradually invited her to come into breakfast, though she still lived out in the woods.  But by the time my friend died in 2012, Panther was used to being fed by her daily...and was even using a litter box.  So I asked if I could have her, though she would become an indoor cat.  She was the second "queen calico" in the house until Muffin died 2 years ago. 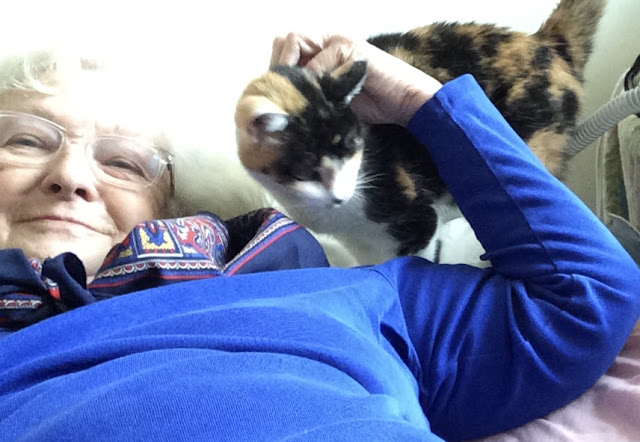 Panther used to love when people would come over to visit.  She would shyly watch, then lie in the middle of the floor, not to be petted.  She would start chasing her tail to amuse my guests.  It happened most of the times anyone visited.

The water bowl in the bathroom was her favorite place to drink.  A bowl of water by food in the kitchen just didn't taste the same somehow. 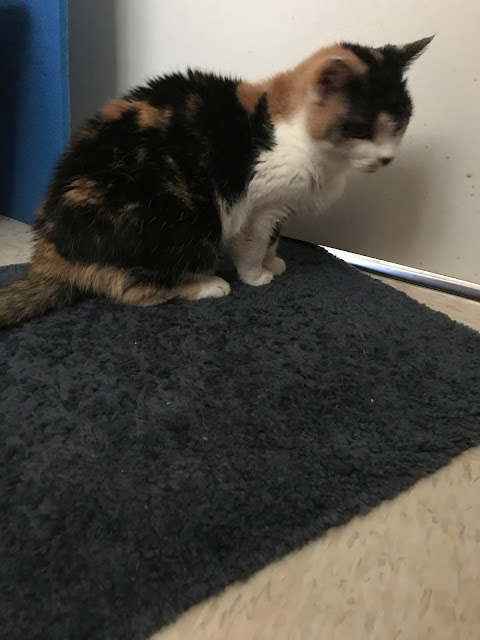 She started losing weight, and being very weak, but we found thyroid problems and started giving her pills for that.  Then the vet thought her mouth had problems, so we were looking to relieve pain by giving her transdermal pain relief on her ears twice a day.  It may have helped, but the last couple of months were spent mainly asleep. 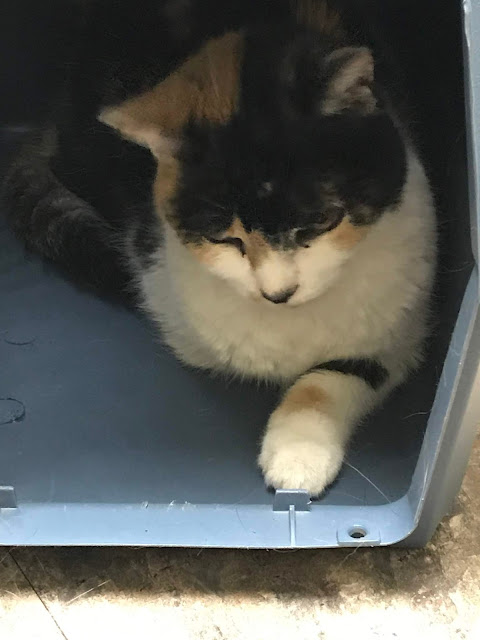 There were many times I would throw treats across the floor, and Panther would chase them, and gobble them up.  I kind of limited it to 10 treats at a time.  Later she couldn't chew them, so we stopped doing that.  There are probably some (as well as other toys) under furniture which I haven't found yet.

I've donated all her paraphernelia to various sites and people who care for cats...but the scratching post is still here (where she never used it.)