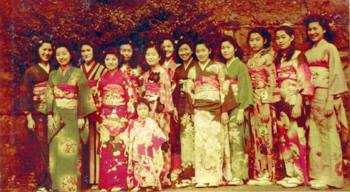 As various immigrant refugees to the United States are having difficulties from the government, I was interested in what happened about 76 years ago. The following is quoted from NC Expatriates on Facebook.

They had begun arriving the day before, a Thursday when the first train had pulled into Black Mountain. ON THIS DAY the influx of “tourists” continues, with the goal of having all the new arrivals in place at Montreat’s Assembly Inn by the weekend. But these aren’t ordinary “tourists.” With the sudden declarations of war after the Japanese attack on Pearl Harbor, Axis diplomats and their families have been caught in their host countries.
These German, Italian, and Japanese non-combatants and their dependents are the responsibility of the State Department’s Special War Problems Division. International protocol calls for above average treatment for this select group of people but at the same time the practical matter of limiting spying and espionage opportunities complicated matters for the Special War Problems Division. The solution is to find resort hotels deep in the mountains in easily guarded locations. One of these is Montreat’s Assembly Inn, located deep up the cove from Black Mountain, and surrounded by the tallest mountains east of the Mississippi River.
Transportation to Assembly Inn is overseen by the FBI as a practical matter with their counterintelligence concerns and executed by the Border Patrol, which takes over the protection and security of these non-combatants.
The Japanese do not mix with other Axis detainees. Upon arriving at Assembly Inn, the Japanese are housed on the third floor, while the German and Italians occupy the lower floors. The Japanese present another problem as well. All of the Japanese detainees at Assembly Inn are female. This was because of the different value the Japanese place on females in their culture, with girls being at the bottom of the rung. As both the United States and Japan are exchanging diplomats on per value system, all of the Japanese men are exchanged first, as they are traded for the families of the US Ambassador, and the Tokyo Embassy employees. That leaves the Japanese women in the United States, some for the duration of the war, as higher-ranking men are exchanged continuously ahead of them.
As Christmas rolls around, the Montreat Retreat Association, which has already placed Japanese, Italian, and German language Bibles in the rooms of Assembly Inn, provides Christmas presents for the children at the Inn. And on Christmas Eve, 1942, young people from Black Mountain gather on the stone bridge across the lake in front of Assembly Inn and sing Christmas carols with the interned diplomatic families. The detainees are allowed to exercise in the Assembly Inn parking lot and around the lake, and across the stone bridge.
Some 25 Justice/INS guards handle security, 5 of whom were usually on duty at any one time.
By April of 1943, enough non-combatants have been exchanged nationwide to allow those remaining to be consolidated at one or two locations. By April 30th, Assembly Inn is returned to the Montreat Retreat Association.
Kevin E. Spencer, Author, North Carolina Expatriates

-Aerial view of Montreat in autumn. Assembly Inn is to the left, with Lake Susan centered. At the top of Lake Susan is the concrete bridge where Black Mountain residents and the interned diplomats and their families gathered to sing Christmas Carols on Christmas Eve of 1942. 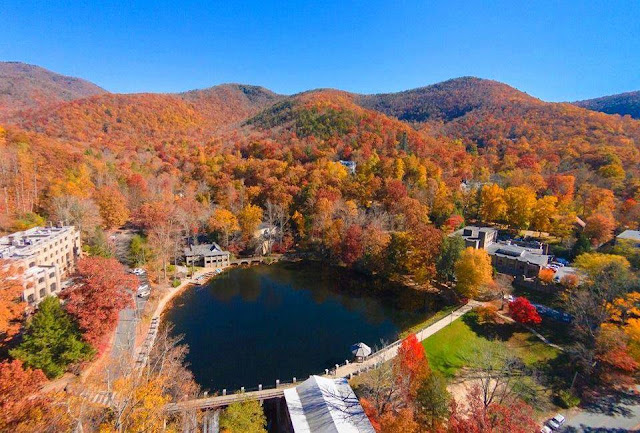 -German children and families having a party on Assembly Drive near Lake Susan. 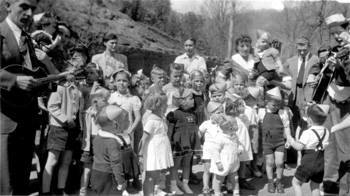 -Children of Axis diplomats on the patio outside Assembly Inn. 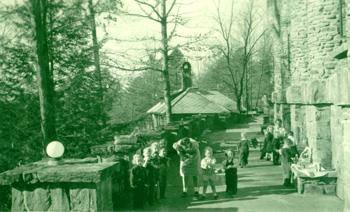 -2 of the INS guards stationed at Montreat. 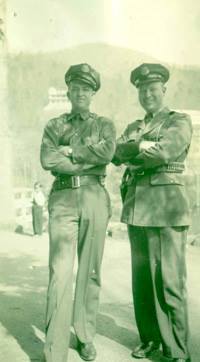 Some pictures, and contributing research, are courtesy of the Presbyterian Heritage Center at Montreat, PO Box 207, Montreat, NC 28757

Sharing with Sepia Saturday this week.  My line of women aren't dancing (the Japanese at the beginning of the post).  Perhaps the children were.  Thanks for stopping by. 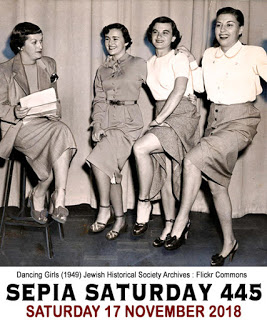