Helen said, when are we going?

I thought, oh no, this time we'll have to really find it, won't we?  And I said, how's next week? It ended up being 2 weeks...but Helen was the one pushing it forward.

Anyway, she said, you're in charge of navigation and I'll drive.

I met her and left my car at our usual parking lot.  Get in the car and she hands me a card with the instructions how to get there written out.  I show her my phone, which with a couple of twiches gives the same information.  I asked her if she trusted me.  We both laughed.

We got there finally, it was a muddy rainy day (not supposed to be, but that's North Carolina weather these days.)

It was about our second (third?) time trying to find it.  I wonder if it had changed locations, though the address was on the same highway, well away from a town.  We parked and had to enter through an antique mall, rather than the actual cat museum which was on one wing of a very old school.  The road is called Old School Road. 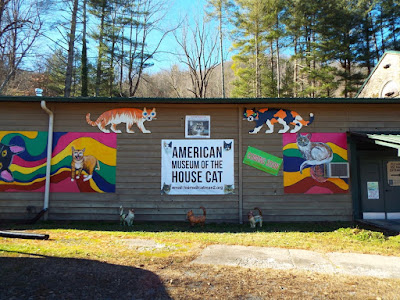 Yes, a million or so cats in all forms, stuffed, mumified, ceramic, plush, with rabbit fur, metal, merry-go-round (carousel?) or how about one popping out of a garbage can over and over with moaning motor noises?  Fortunately most of the displays were inside glass display cases.  Otherwise the dust would have been insane. 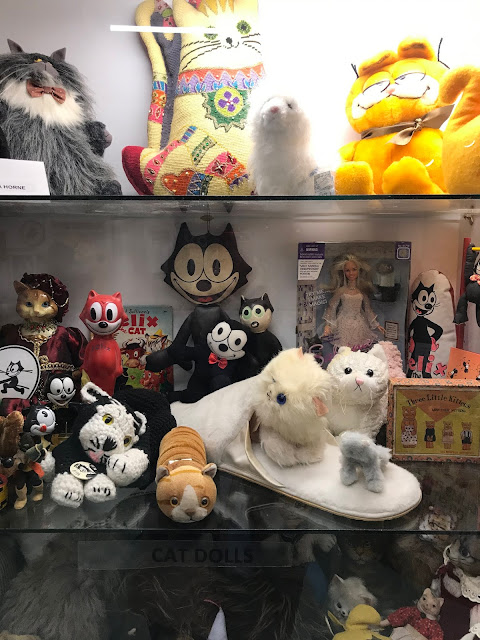 Cat Memorabilia piled on top of each other, every where you looked! 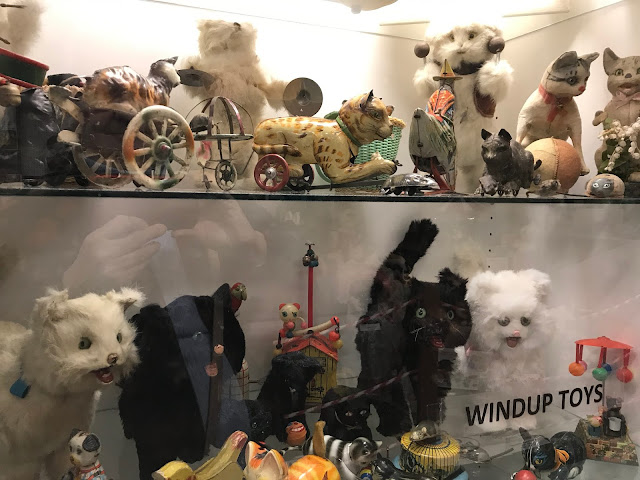 I'd been warned to expect this. 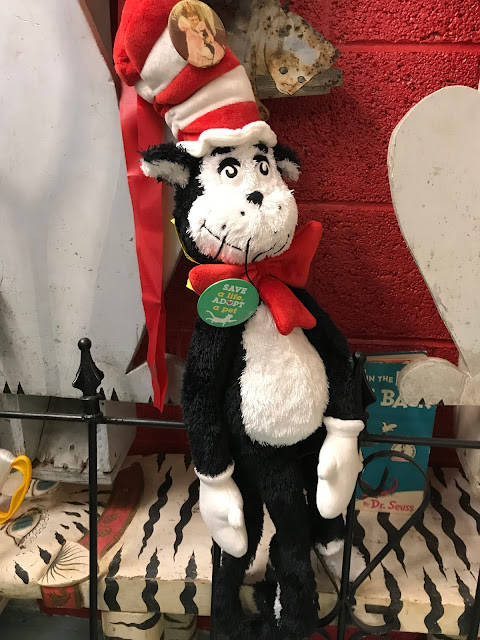 It was good to see familiar faces.
And one that looked vaguely familiar... 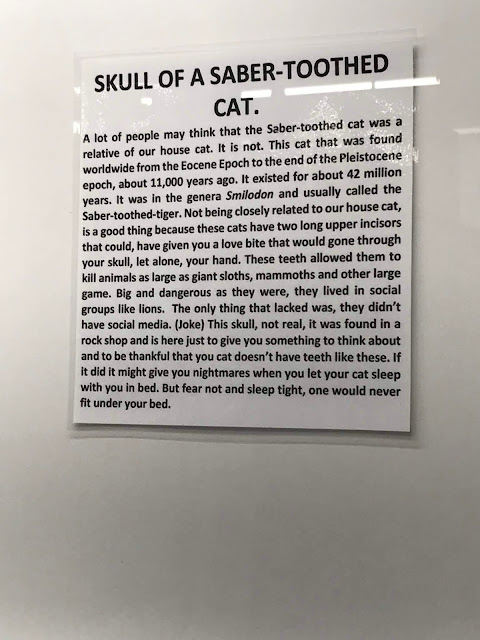 But it was still musty, with all those old things piled up every where. 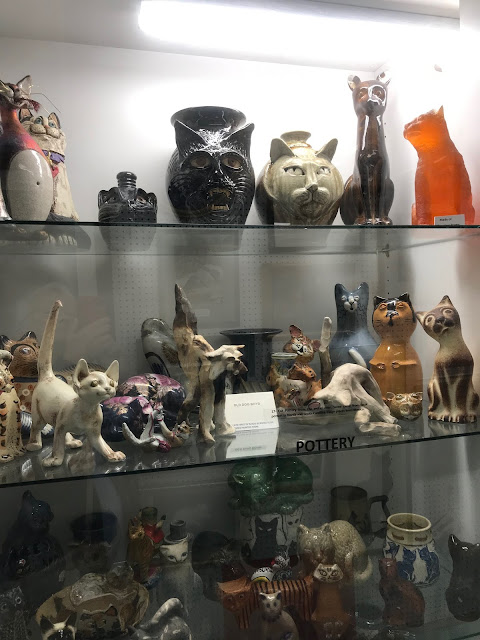 And we had to pay to get in also.

But we forgave the owner, who actually has an amazing collection, because he uses the fees to run the only cat shelter in Jefferson County, setting up many cats in foster care, and it's no-kill as well as having the cats in rooms, rather than cages. 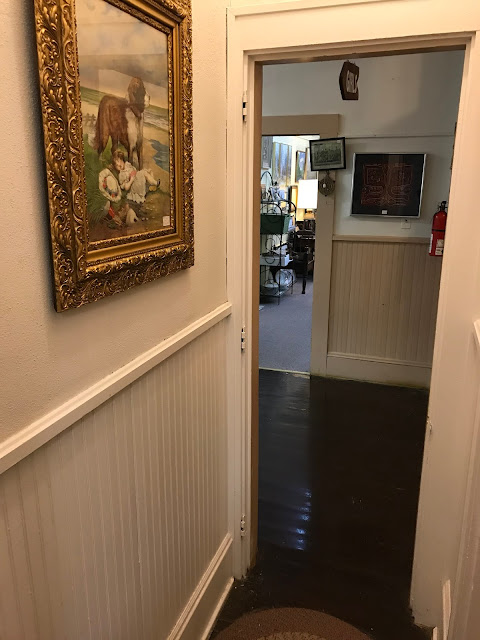 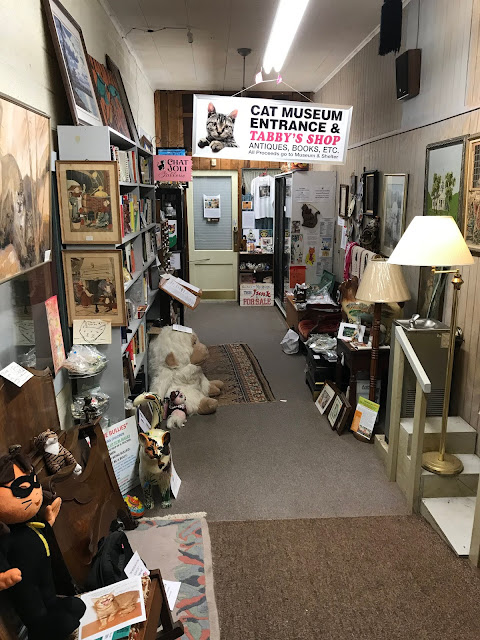 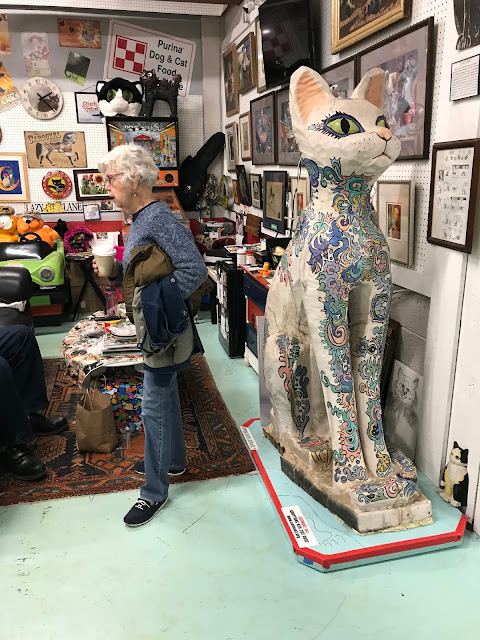 Helen is not really very tall, which gives this cat some perspective. 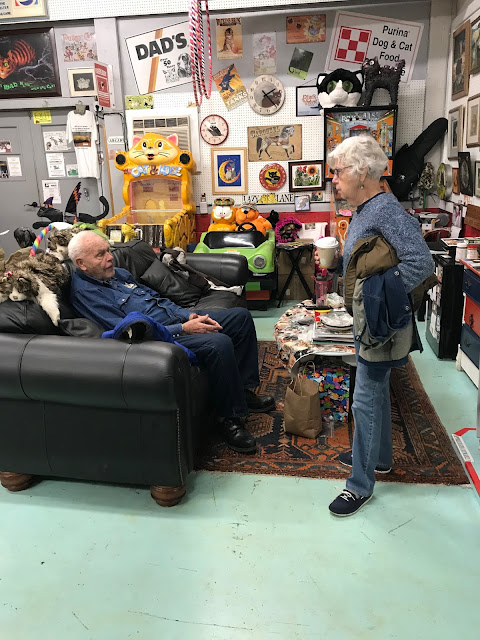 Here she was learning about the cat shelter from Dr. Harold Sims.

I don't think my Disney loving grandchildren would understand or enjoy this musty museum.  It needs a bigger environment and control over the quality of the air.  Helen told me the man is building another pace for the museum across the street.  That's promising.

I am really glad that we visited the Cat Museum...aka The Great American Cat Museum.