Not secret, or is it?

If you like to drink a bit of locally brewed beer (really good!) And if you like to nibble on a lot of different tasting foods prepared by local chefs with mostly local products...you missed it.

The Tailgate Market fundraiser was held on a Thurs evening.  When?  Where?
It was in a big field behind a practically invisible brewery in an industrial park which has a sign that's maybe 2 feet by 8 inches...on a lesser highway.  Only people who really want to go to Pisgah Brewery find it, and usually not on the first try driving along Old Hwy 70 near Grovestone Quarry at North Fork Rd, across from the Veterans Cemetery.  Try using a GPS to find that! 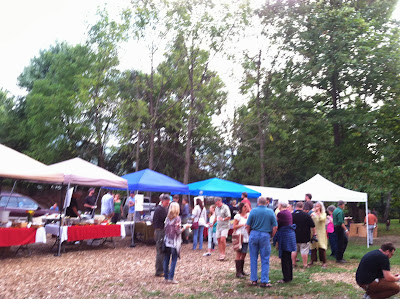 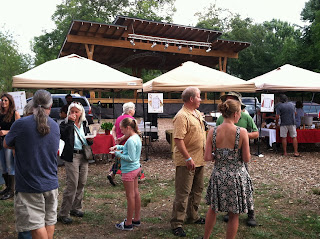 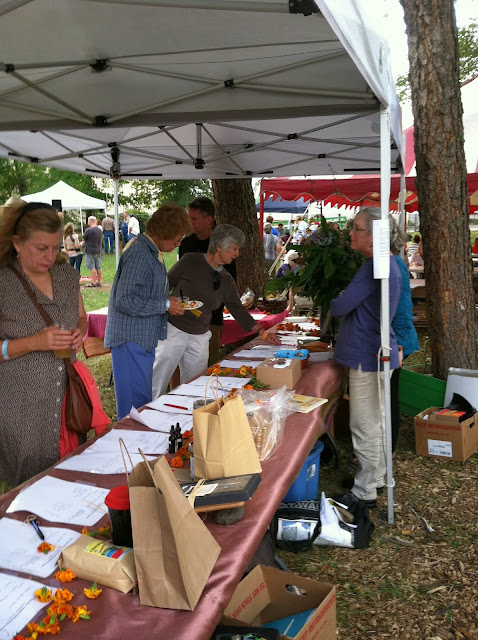 Serious shoppers were getting ready to bid for silent auction on great products!

Once a year they have a gala event.  This has been on a Thursday for the last few years...held in this  big field, with lots of tents.

Not as many people came this year as last.  The food was better than ever, I thought. Weather was great, coolish and not humid.  And there was a tented seating area with tables for those of us who have trouble holding a glass of beer as well as a plate while eating.  The silent auction was twice as big, with great donations to be bid upon.

I went over to the Tailgate Market on a rainy Saturday morning last weekend to get my pastries and fresh produce.  The parking situation was deplorable.  It meant that nobody who had never been there would ever be able to find it...I know a double negative.  That's what it felt like.

The market might survive a rainy day, because a stroll with an umbrella is still a doable thing.  It limits the usual gang of folks with their dogs, as well as families with little kids running all over the place.

But for the 3rd  time (or more) there was construction such that the parking lot beside the market was not available for Tailgate Market customers.   The market was completely invisible from both Montreat Rd as well as the parking lot that was available...and there was yellow tape across places that walking should have been allowed.

How does a Tailgate Market survive long without a place to park?  How can people who are visitors to Black Mountain find it and support these local businesses?

The signage for the market has become almost invisible too this year.  Little green signs may look fine in design, but they certainly don't catch a tourist's eye as they drive through town, especially when lower than any car that might block them, as they might be read if you stood right in front of them with small low-contrast lettering.

That rainy Saturday morning only a few vendors were there, and even fewer customers.  The vendors who did come probably bought from each other.  This is a real shame.

My editorializing is my personal opinion, and should not be considered a reflection from any friends at the market.
Posted by Barbara Rogers at 1:00 AM