While we watched on TV (when the elec was still on) with our mouths hanging open, the damage this Category 4 hurricane made in the Florida panhandle yesterday (having come ashore Wed. around 1:30 pm)...his waters finally gave out on Thurs here in the afternoon.

Black Mountain had received over 7 inches of rain in that 24 hours.  Old Fort had even more.  And Marion even more than that.  So no wonder there were flash flood warnings!  Mountains give up the rain pretty fast, and yet...the good news was that it didn't rain so badly over toward the coast where the last hurricane Florence had flooded the low lands with continued rivers overrunning everything.

So I just wanted to add this weather to my history page...here. 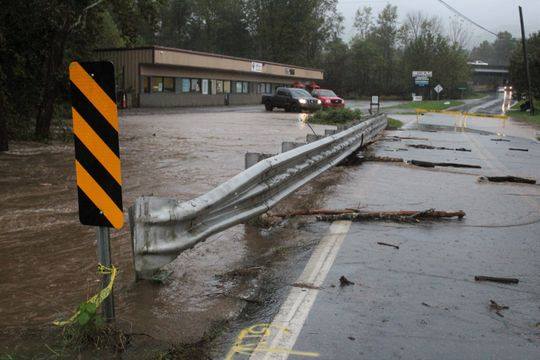 If I drive down my street, Blue Ridge Road, down the hill, across US 70 at the bottom of the hill, across the tracks, then about a block, there's the Swannanoa River, usually just a creek hereabouts.  That guard rail shows the usual length of it, and it's usually running perpendicular a few feet under the road (South Blue Ridge Road here).  But yesterday around 10 am, a Black Mountain News photographer captured it as it flooded to the pavement.  It has gone higher in the past, but this of course closed the road.

The same publication on Facebook gave this photo of my favorite walking area. Lake Tomahawk is a very shallow lake, and is in a bowl of valley between lots of steep hills, and one creek that feeds it. I don't even know if it has a name, maybe one of the North Forks.  Around here there's even a North Fork Right Fork.  I've never seen the Left Fork...but this one probably isn't it.  I'll ask some folks who live below the lake on the creek that flows into the Swannanoa just a few blocks beyond their house. 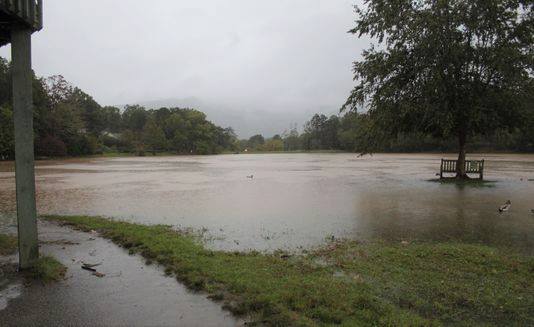 I'm glad the BM News photographer took this, because that's my path, over there on the left, and the post is the corner of the Lakeview Center building.  The bench and tree are usually on a spit of land with Lake Tomahawk on either side...and you can walk out to it.  A friend who lives overlooking the lake said it had gone back down in a few hours!  I was glad, thinking of that earthen dam that protects all those houses along the creek below the lake.

I wish I had a photo of the one of the most amazing devastations from the storm near Panama City FL.  It was on the weather channel yesterday, of a train that had been blown over...off the tracks all along the length of it...empty cars, no engine.  There were some cars that had been blown right off the wheel trolleys.

I know the personal devastation for homes was also bad, and there are many photos of how awful that looks...just lumber and a few slabs of concrete where homes were.  I hope the occupants were in shelters...and that they are able to return to their lives without too much trauma.

It was hard to read of my friend on Facebook in Tallahassee when she lost power and then was sitting in her closet with her cat listening to the roar of the wind.  I'm glad that she wrote the next day that she survived the storm without damage to her home, but was still without electricity on Thursday. The damage to property and especially trees from so much wind is staggering.

But we didn't suffer from wind.  And I only wanted to post because I wanted to save these photos for my own history.